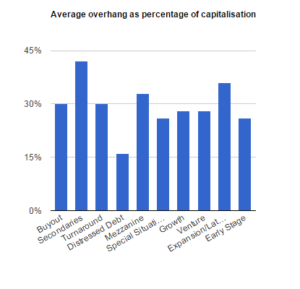 Secondaries funds continued to have higher levels of undeployed capital than other strategies, leading secondaries buyers to use leverage and staple deals to make purchases attractive, according to new research.

For 2007 to 2015-vintage funds, secondaries had the greatest proportion of dry powder when compared with capitalisation, with 42 percent of committed capital uncalled on average, advisory firm TorreyCove Capital Partners said in its 4th Quarter 2015 Newsletter. This represented an average of about $437 million.

Expansion/late stage and mezzanine funds had the next highest amounts, with 36 percent and 33 percent respectively.

In absolute terms, buyouts had the largest amount of dry powder with an average of $457 million capital uncalled.

Staple deals were one way secondaries buyers were achieving attractive discounts on stakes, he said, adding that he had recently seen a portfolio of mid-market private equity funds priced at a premium to net asset value.

“Despite the slowdown in exits in the first quarter, leverage is still cheap and almost all the secondaries buyers are eager to put money to work, juiced up by the leverage,” he said.