Many were expecting 2017 to be the year when GP-led secondaries processes truly arrived, when big-name deals would cement their role as a portfolio balancing tool, not just a cry of distress. These observers were largely correct, as one big deal after another came to the market.

In June it emerged that BC Partners, one of Europe’s biggest private equity houses, was considering using a stapled deal to help boost fundraising for its €6.7 billion 10th fund.

The process, which closed in September, involved secondaries firm Lexington Partners buying around $700 million worth of stakes from 22 limited partners in BC European Capital IX, a 2011-vintage, €6.7 billion vehicle, at the same time as committing around $300 million to Fund X.

“Some of their peers have been racing to big numbers,” an LP in BC IX told sister publication Secondaries Investor in June. “They have now got to a decent initial number and this is just to top them up.”

In July Secondaries Investor revealed that Warburg Pincus was exploring a process on one of its funds. That transaction, which closed in October, involved the buyout firm selling a $1.2 billion strip of Asian investments from its 2012-vintage, $11.2 billion Fund XI, helping the firm reduce its exposure to the region. Lexington and Goldman Sachs Asset Management backed the deal.

In September two large Scandinavian private equity firms also got in on the action. In a self-run process, EQT gave investors in its sixth and seventh flagship buyout funds the option to sell their stakes to Swiss-based Partners Group, which in turn made a stapled commitment to the $800 million-target EQT Mid-Market Asia III. LPs who decided to part with their stakes received a 19.5 percent net internal rate of return and a 1.8x net money multiple.

A process on Nordic Capital‘s Fund VII, a €4.3 billion buyout vehicle, had its first bidding round in the last week of November. The deal would involve moving the remaining 10 assets in the 2008-vintage fund, which has a net asset value of around €2 billion, into a multi-year continuation vehicle which would have a five-year term. Advisory firm Campbell Lutyens is running the deal.

Not a done deal

The traffic has not all been one-way. In October Apax Partners decided against carrying out a process on its €11.2 billion, 2007-vintage Apax Europe VII fund as it became clear from conversations with the LP advisory committee that their was insufficient investor support. Investors had been given the option to cash out or roll over their commitments into a continuation fund with a five-year life.

Market participants have questioned whether it is fair to propose a process with no “do-nothing” option, which does not allow LPs to continue with what they signed up to at the start of the investment period, or whether it is fair for smaller LPs to deal with the legal- and tax-related costs of rolling their holdings into a new vehicle, regardless of whether the ultimate returns are higher.

Others have expressed the view that GPs will have to become better at communicating the aims of such processes to their LPs, to give them the confidence that the deal is worth the effort and that all interests are aligned. Conversely, one buyside source told Private Equity International that he expects GPs to become more aggressive in their use of GP-led processes in 2018, as they make decisions that they believe are in their “investors’ best interests”, whether they like them or not.

As secondaries become more mainstream, further debate regarding how best to run such processes is likely to continue into the new year. 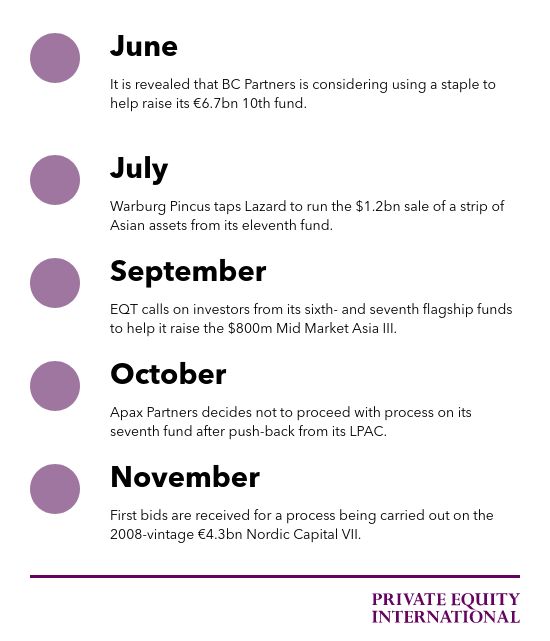