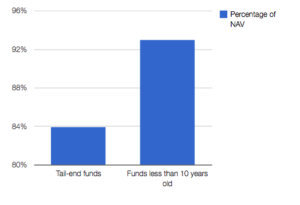 Tail-end funds sold by Greenhill Cogent in the first half of this year transacted at an average of 10 percent to 15 percent lower than more recent funds, according to the firm’s semi-annual Secondary Market Trends and Outlook report, released last Wednesday.

In the first half of this year, tail-end funds priced on average 84 percent of net asset value (NAV), compared with 93 percent for more recent vintages. Around 40 percent of funds sold by the investment bank and advisory firm during the period were tail-end funds, defined as being older than 10 years.

Of the tail-end funds Greenhill Cogent sold, just over a fifth transacted at 90 percent or more of NAV, according to the report.

“While asset prices on average have continued to climb, we’ve witnessed a clear bifurcation between higher and lower quality funds,” said Stephen Sloan, co-head of capital advisory at Greenhill Cogent, in a statement. “Tail-end funds generally price at larger discounts because these funds have relatively little, if any, upside potential in many cases,” added Sloan.

Despite robust and growing demand for tail-end funds, the firm expects pricing for such positions will not move higher given future return prospects.

There are currently 1,001 funds that are more than 10 years old which haven’t been fully liquidated and still have assets remaining in their portfolios, according to PEI’s Research and Analytics division. By region, the bulk of the funds focus on North America at 46 percent, followed by Western Europe and globally-focused funds at 18 percent each.

“What we see in the tail-end market is a very different set of dynamics,” said a partner at a London-based fund of funds manager. “There are generally fewer companies in the portfolio but you will generally have more information on these companies and there are opportunities there if you know where to find them.”