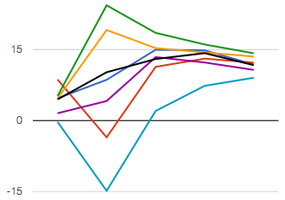 Short-term returns for global secondaries funds rose in the second quarter of 2015, according to data from the Institutional Limited Partners Association (ILPA) released last week.

Secondaries funds generated a pooled net internal rate of return of 4.48 percent, up from the previous quarter and from a year ago. The ILPA Secondaries benchmark was 1.05 percent in the first quarter and 3.4 percent in the second quarter of 2014, according to the Q2 2015 ILPA Private Markets Benchmark.

Most other benchmarks also rose during the quarter.

Compared with other strategies, secondaries funds underperformed in the second quarter, beating only US and Canadian private equity, distressed and natural resources strategies. Long-term, secondaries returns remained relatively unchanged across 5-year and 10-year periods, whereas most other strategies saw a downward trend.

Returns from secondaries still delivered lower returns than all strategies combined, with a 10-year net internal rate of return (IRR) of 11.71 percent, a little below the 11.84 percent generated by the ILPA All Funds Index, which combines all strategies including private equity, venture capital and funds of funds.