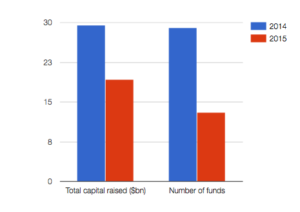 Secondaries funds raised less capital in 2015 compared with a year earlier, despite the largest ever secondaries fund closing last year.

Thirteen dedicated private equity secondaries funds held final closes on a total of $19.3 billion, compared with $29.5 billion raised by 29 firms in 2014, according to PEI’s Research and Analytics division.

Two funds accounted for the bulk of capital: Lexington Partners‘s Lexington Capital Partners VIII made up over half of the total raised, closing above target on a record $10.1 billion in April.

While this is the first time secondaries fundraising has fallen since 2010, the secondaries market is not experiencing a downturn, according to Sunaina Sinha, a partner at placement agent Cebile Capital. Large funds that were raised in 2014 were out of the market in 2015 and would return this year or next, she said.

“The volume of dollars raised goes up and down depending on who is raising and the amount they’re raising,” Sinha told Secondaries Investor. “LPs still have conviction in the secondaries market to drive returns in their portfolios, otherwise we would be seeing a lot more failed fundraises, and we’re not.”