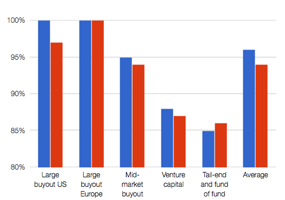 The average pricing in the secondaries market fell in the third quarter, although discounts for large European buyout funds and tail-end funds remained unchanged or rose, according to data compiled by Triago and released last week.

The advisory firm found that on average, secondaries discounts widened, with pricing falling to 94 percent of net asset value (NAV) in the second and third quarters, from 96 percent in the first quarter.

Pricing for tail-end funds and funds of funds rose to 86 percent in the second and third quarter, from 85 percent in the first quarter, Triago found. Meanwhile, pricing for large European buyout fund stakes remained unchanged at par.

“The current average discount for secondaries is 6 percent below net asset value in a market on pace for some $40 billion in volume, bettering 2014’s $36 billion record,” Triago wrote in its report.

“With $62 billion in dry powder targeting secondaries, discounts should hold in a tight range even if PE funds post modest declines.”