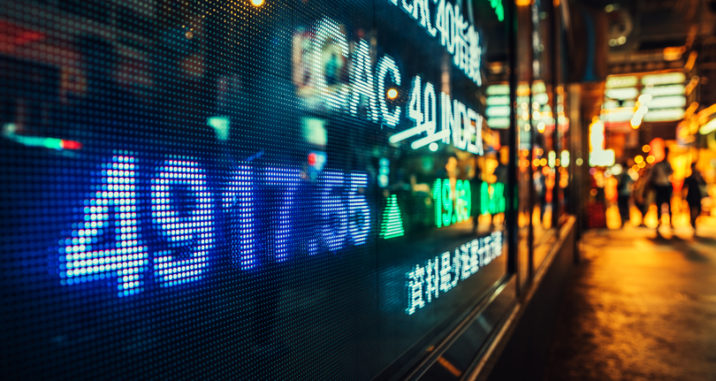 For investors in illiquid asset classes, thoughts have turned to the “denominator effect”.

When public markets fall in value, the relative value of less liquid asset classes – such as private equity – in an investor’s portfolio (the numerator in this scenario) grows, while the overall portfolio (denominator) shrinks. This throws target allocations out of whack and LPs suddenly find themselves over-allocated to illiquids. Some may be forced to take remedial action, such as putting a freeze on making new commitments to funds or offloading fund interests through the secondaries market.

And public markets have fallen. S&P 500 trading has been halted several times as a drop of more than 7 percent triggered an automatic 15-minute shut-off. At the time of writing, the index is down more than 32 percent from its 19 February high, and over in London the FTSE 100 was at a nine-year low with the pound tumbling to a 35-year low.

“The markets have been so abysmal, and the drop so sudden, I don’t think people have really got a handle on their portfolios,” a head of private equity at a private bank told sister title Private Equity International. “We have already had clients coming to us to ask, ‘Where are we in terms of future capital calls?’”

Most LPs receive reports at the end of every quarter, and private equity results are often lagged six months, said David Fann, president and chief executive at TorreyCove Capital Partners.

Whether drastic action needs to be taken depends both on what happens in the markets and on the type of limited partner.

“Some clients will postpone some of these investment decisions, because they want to see how this crisis works,” Andrei Frei, co-chief executive of Partners Group said on the investment firm’s annual results call on Tuesday. “But I believe many large institutions, like sovereign wealth funds … they don’t really do that maths. They will continue [to commit], in my expectation.”

Fann explained that some investors, due to the way they’re set up, cannot exceed certain allocations to illiquid assets.

“In those circumstances, they’re going to be forced sellers,” he said. Others operate within a range and will therefore have more flexibility.

“And then there are just some investors that don’t like taking risk in down markets and do place a premium on liquidity. There will be some investors that will certainly either freeze their programme or might divest out of some of their private equity holdings.”

If institutions such as pensions experience material reductions in their portfolios, they will need to liquidate positions elsewhere to ensure they’re adequately funded.

“People will be offloading their public equity and credit holdings first to satisfy their cash liabilities, but when forced against a wall, we’re likely to see a lot of non-economically driven LP stake sales at material discounts to NAV as we did in the last crisis,” said a senior executive at a public institution in North America.

“You develop an overexposure to private markets as public holdings deteriorate and it becomes a source of worry for CIOs managing a portfolio.

The private bank PE head adds that some LPs, such as family offices or high-net-worth individuals, have levered their portfolios, and as such will be forced to liquidate liquid assets to meet margin calls, exacerbating the denominator effect.

The widespread use of subscription lines of credit could also make things trickier for LPs.

“This crisis will differ from the last one, because you can assume that, of your PE portfolio, 20 percent of your private equity portfolio will be called in the next 12 months (this is last year’s activity, but on a credit line),” the private bank investor said, adding that distributions are already beginning to dry up, making honouring capital commitments more challenging.

What’s more, for those that have the stomach, the data show that investing through a downturn produces the best returns. The median return of a 2009-vintage fund is 13.9 percent, compared with 8.1 percent for a 2006 vintage fund, according to EY data.

“If history repeats itself in any way, shape or form, times of severe market duress are in fact the best time frames for private equity investors,” said Fann. “So that’s the balance. In the face of a declining denominator, how do you position the portfolio? Do you increase the allocation to private equity?”

Those with the flexibility to keep an aggressive private equity allocation are starting to ask about distressed opportunities or deep value private equity strategies, as well as emphasising managers that “can navigate significant inflection points well”, Fann said.

He added: “Those that were around during the great financial crisis, certainly recognise that abandoning the asset class in the darkest days isn’t always an optimal outcome. Some are positioned to lean in.”