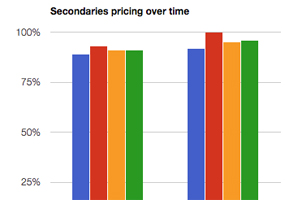 Pricing in the secondary market has begun to plateau but remains strong, despite a declining euro and volatile oil prices, according to Greenhill Cogent’s first quarter secondary briefing.

The average bid for all strategies was 91 percent of net asset value in the first quarter, while the average pricing for buyout funds was 96 percent of NAV, the highest pricing of all strategies. The pricing data is based on Greenhill Cogent transactions.

Pricing on venture capital and energy has been more challenging, in part because they are fewer buyers. Energy-focused funds saw an average pricing of less than 70 percent of NAV in the first quarter.