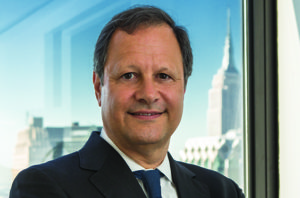 Pomona chief executive Michael Granoff on the importance of listening and the evolution of the secondaries market.

Michael Granoff is a good listener. He listens to the market, he listens to his investors and he listens for opportunities. It’s a trick he picked up from Bill Clinton.

“He was probably the most active listener that I have ever met,” the chief executive of Pomona says. He used to be a Congressional staffer and worked as part of the presidential transition team for Clinton.

Granoff took note of Clinton’s ability to listen intently, not just as a way to get information and process it, but also in terms of the connections he could make with people. The secondaries specialist is quick to link those skills with his market. ”Investors invest with us, not just because of what our track record is, but because they get a feeling that we look at the world in the same way that they do. That we connect with them.”

He started in the space when it was barely a market at all. He bought a stake in a venture capital fund amid 1989’s US savings and loan crisis after hearing about it from a VC contact.

Granoff quickly understood the opportunity, and its potential. He left his job four years later to partner with Fran Janis and found Pomona, which he named after the street he grew up on in Worcester, Massachusetts. Pomona is also the Roman goddess of abundance.

“When I started Pomona, and was raising its first fund, we thought the transactions were interesting, but we really didn’t know who would sell or how much supply there would be,” Granoff says in his Midtown Manhattan office.

“People would say ‘you seem like a nice guy but why would anyone sell you an interest in a good fund? If you’re only going to be buying interests in lousy funds, maybe it’s not such a great business.’”

The firm surmounted the understandable scepticism and closed its first fund, Pomona Capital I, on $42 million in 1994.

Since then, the secondaries market has developed into a fully-fledged sub-asset class, with $40 billion in closed transactions in 2015, according to advisory firm Greenhill Cogent.

“Today, there isn’t a good private equity fund that we haven’t bought an interest in or seen an interest in,” he says. “Last year, we looked at $35 billion of dealflow.” He adds that his firm is extremely careful in what it buys, focusing on quality assets and typically acquiring only 1 percent to 3 percent of what he calls “the doable dealflow that we see”.

Pomona, which has $8.1 billion of aggregate capital commitments, has now raised eight funds. In March, it launched its ninth vehicle, Pomona Capital IX, which is targeting $1.75 billion, and held a first close on half the capital in November.

Limited partners have learned to embrace the secondaries market and the firm’s brand. Its LPs are diverse and come from 17 countries, with many of them backing several funds.

In the US, LPs include the Highland Street Foundation, Macalester College, the City of Tallahassee Pension Fund, Western Conference of Teamsters, Firemen’s Annuity and Benefit Fund of Chicago, and Oklahoma Firefighters Pension & Retirement System, according to data from PEI.

Diversity in its investor base is an asset for Pomona and the firm places a strong importance on cultivating these relationships, as LPs can provide leads on potential secondaries transactions or in-depth information on funds the team may not know well.

Another important factor for Pomona is its strategic partnership with its largest LP, Voya Financial, previously called ING.

The relationship has evolved naturally: one of the affiliates of the insurance and investment company had been an early LP in Pomona’s funds, and the company approached the secondaries buyer in 2000 to discuss a potential partnership. Now Pomona benefits from Voya’s global reach while maintaining its independence in day to day business. The firm also manages a separate primary account for the insurer.

Check back for more from Granoff in the coming weeks.