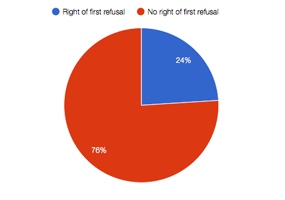 The majority of limited partnership agreements (LPA) do not contain right of first refusal clauses, according to a study by alternative asset law firm MJ Hudson. The lack of these clauses is beneficial to secondaries transactions.

In a June report, MJ Hudson looked at a sample of recently-closed funds and found that 76 percent of LPAs did not contain the clause, which requires that stakes must first be offered to existing investors in a fund when a limited partner leaves. Right of first refusal clauses add an extra process for buyers who are not existing investors, extending transactions.

“Fewer rights of first refusal aids the secondaries market,” Ted Craig, a lawyer who works on secondary transactions at MJ Hudson in London, told Secondaries Investor. “Not having a right of first refusal clause eases the transfer of fund interests to non-investors in the fund.” He added that increased activity on the secondaries market and added flexibility for the stake to be sold more widely have meant it is becoming less common for LPAs to contain the clause.

The funds sampled had a total value of $50 billion across mainly North America and Western Europe and were funds either managed by MJ Hudson’s clients or funds the law firm had reviewed for its clients.

“For the 24 percent that do have the right of first refusal, there is less certainty for the buyer in a secondaries transaction that they’re actually going to get the fund interest or at least the size of the stake they thought they would,” Craig said.

For funds containing the clause, existing investors usually have an average of between four to six weeks to bid on stakes, Craig said.