One quarter of limited partners are not involved in the secondaries market going into next year, according to a survey by placement agent Probitas Partners.

In the firm’s Private Equity Institutional Investor Trends for 2018, 26 percent of respondents say they “are not active in secondaries in any manner”, up from 17 percent in last year’s survey.

Probitas managing director Kelly DePonte believes that although complex deals can offer attractive returns, their complexity as well as the scrutiny they have drawn from the US Securities and Exchange Commission have suppressed a notable increase in deal volume. He also believes that lumpy fundraising this year created a somewhat misleading picture of the market.

“Fundraising for secondaries is up again this year but that has really been driven by three well-regarded, long-lived managers that a number of investors see as core holdings,” DePonte told Secondaries Investor. “I’m not sure interest this year was truly widespread, and on the basis of this survey it won’t be widespread in 2018.”

The number of LPs who actively invest in secondaries funds fell to 44 percent from 48 percent the year before. Activity for LPs directly acquiring stakes in funds weakened, as well, to 37 percent from 43 percent.

Direct secondaries had a slight increase in popularity, with 19 percent of LPs expressing an interest in acquiring direct positions in companies on the secondaries market, compared with 12 percent last year.

North America accounted for 53 percent of responses, the UK 22 percent and Asia 16 percent. 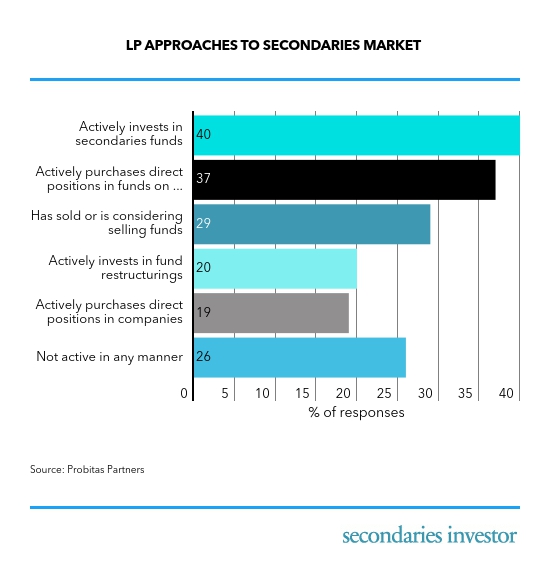