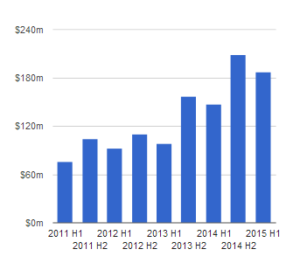 HarbourVest Global Private Equity (HVPE) realisations have more than doubled since the vehicle that invests in HarbourVest Partners‘ funds listed on the London Stock Exchange in 2010.

The fund of funds reported record realisations in the first half of the year, with HarbourVest funds and co-investments returning $187 million back to HVPE, according to a statement released at the end of September.

The firm said it was on pace to meet the $356 million received during the last fiscal year, which would be more than double the $137.2 million it received from distributions in fiscal 2010.

Growth in secondaries and direct co-investments outperformed the primary fund portfolio during the period.

“Investors did benefit from liquidity options offered by the growing and dynamic secondary market in limited partner interests,” the report noted.

Secondaries remain an integral part of HVPE’s realisations, with the fund making $31.7 million from HarbourVest’s dedicated secondaries funds so far this year, compared with a just $1.1 million for all of fiscal 2010.

The fund invested $29.3 million in HarbourVest’s secondaries funds in the six months to 31 July, up from $19.4 million for the same period last year.