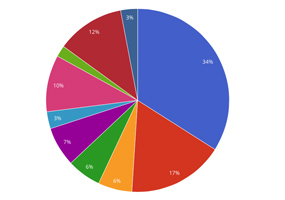 About 34 percent of secondaries deal volume came from financial institutions in 2014, according to a report from Cogent Partners.

While the deal volume from banks increased from 27 percent in 2013, it still didn’t reach the level Cogent had expected it to.

“These groups [financial institutions] haven’t been making new commitments to the asset class, but with another two years they can let the assets naturally run off,” managing director Todd Miller told Secondaries Investor. “They were still a big part of the market as sellers but we didn’t see the flood of deals we would have expected from them.”

Other big sellers in 2014 were general partners and sovereign wealth funds, which generated 17 percent and 12 percent of volume respectively.

“GPs generate deal flow by way of restructurings – these deals are almost always led by the GP and in many instances after a partially unsuccessful fund raise,” Miller said.

Public pensions accounted for 10 percent of volume, followed by endowments and foundations which generated 7 percent of activity.

“Pensions were somewhat active last year and we would expect 2015 to me a more active year for them,” Miller added. Corporate pensions and corporations tied with fund of funds, each generating 6 percent of volume.

“We continued to see an increase in selling by regular buyers of secondary interests (i.e. fund of funds and secondary funds),” Cogent said. All surveyed secondary buyers managed to sell at least one fund in 2014, it added.