Family offices that invest in secondaries are most likely to do so through a direct secondaries fund, according to a survey conducted by sister publication Private Equity International and Montana Capital Partners.

When asked which two secondaries strategies they would prioritise over the next 12 months, 20 of the 50 respondents named direct secondaries as an option. GP-led transactions – including restructurings, tenders and staples – and small secondaries were each cited by 18 respondents, tail-end portfolios by 14.

The least popular investment approach was funds of funds, with no respondents citing the strategy as one of the two best ways to invest in secondaries.

In last year’s survey, 33 of the 66 respondents chose small secondaries as one of their two options, while 25 chose direct secondaries and 20 opted for GP-led transactions.

This year’s survey also reveals that family offices are taking a more opportunistic approach to selling on the secondaries market. Whereas last year the majority of respondents that sold stakes did so for long-term strategic reasons, this year a majority were driven by attractive pricing (14 out of 48 respondents).

Out of a total of 49 respondents, 26 said that they already invest in secondaries, while five said they were in the process of assessing a secondaries programme. Thirteen declared themselves not active in the secondaries market.

Montana Capital Partners is a Swiss niche secondaries firm with more than €600 million under management. 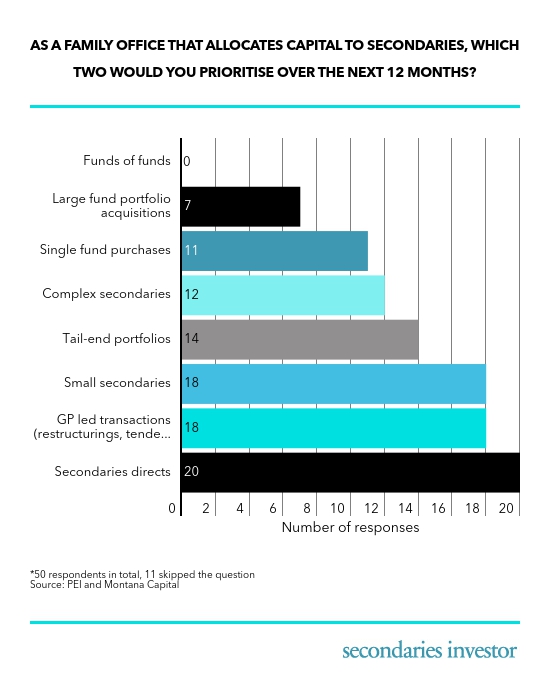