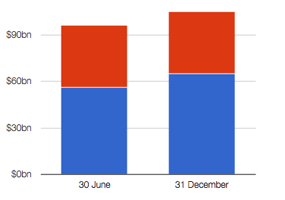 The amount of dry powder in the secondaries market reached a record high in 2015 as the fundraising market remained strong, according to Evercore Private Capital Advisory’s 2015 Secondary Market Survey.

Evercore estimates that the level of available dry powder in the hands of secondaries buyers reached $65 billion as of 31 December, up from $56 billion as of 30 June. In addition, the firm believes buyers are planning to raise another $40 billion in 2016.

The bulk of the increase was among private equity secondaries funds, which represented 81 percent of total dry powder at the end of 2015, up from 76 percent at the end of the first half of 2015.

Dry powder is also concentrated within the industry as the top 20 players manage more than 80 percent of it, according to Evercore.

The increase in dry powder is mainly due to a boost in fundraising at secondaries firms.