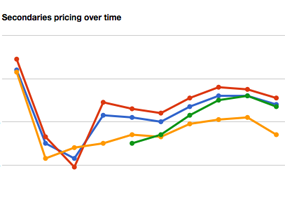 An increase in the proportion of tail-end fund stakes being sold on the secondaries market will lead to a further split in pricing between high- and low-quality funds.

Portfolios containing older vintages tend to have higher exposure to public companies and generally have more limited upside, and this leads to lower pricing on the secondaries market, according to advisory firm Greenhill Cogent‘s Secondary Market Trends & Outlook, January 2016 report.

Buyout funds aged 10 years or older accounted for 67 percent of funds sold last year, up from 21 percent in 2010, according to the report. By dollar value, tail-end buyout funds represented 35 percent of transaction volume last year, a rise from just 13 percent five years previously.

Other strategies also saw a similar trend. By number, 87 percent of venture capital funds sold in 2015 were aged 10 years or older, a rise from 51 percent in 2010, the report noted.