Chinese insurers, sovereign funds, pensions and high-net-worth investors are expected to increase their allocation to alternative investments contributing in part to making China the second largest asset management market globally by 2030, according to research by Casey Quirk, a Deloitte-owned consulting firm.

From $3.2 trillion in 2017, China’s asset management industry is expected to leapfrog to $17 trillion, second only to the US. In fact, by 2019, China’s share of managed assets, estimated to touch $4.3 trillion, could already replace UK in the second spot, the report has predicted. The factors that would drive this exponential growth, as per the report, include demographic factors (creating a rapid increase in retail investors’ wealth), structural factors (the limits of the Chinese banking system to efficiently allocate national savings through corporate lending), and also other policy objectives. 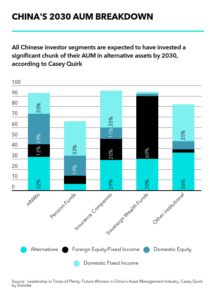 Among the different investor segments, China’s pension fund industry is expected to become a significant player in China’s asset management landscape as it starts to allocate above and beyond traditional asset classes like equity and fixed income, said Natalie Wong, senior consultant at Casey Quirk.

The three pension funds in China – Enterprise Annuity (EA), Occupational Annuity (OA) and the National Council for Social Security Fund (NSSF) had an estimated $371 billion in assets under management in 2016. The report estimates this AUM to increase to $2.4 trillion by 2030, of which 6 percent would comprise of alternative assets.

The demographic shift in China and its resulting impact on increasing the number of pensions drawdowns is prompting the regulators to consider expanding the investment mandate of pension funds and invest in long-term assets such as real estate and private equity, Wong explained.

As the chart below indicates, high net worth investors are expected to have allocated the highest proportion of their AUM (32 percent) into alternatives by 2030. According to the report, these investors are entrusting a larger share of their capital to fund managers. 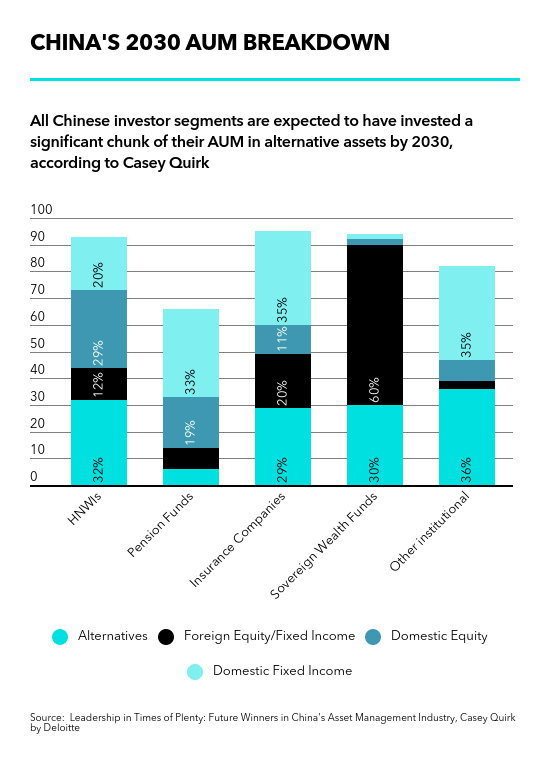 The report also added that domestic asset classes, including alternatives, would continue to dominate Chinese investors’ allocation regardless of the level of currency controls.