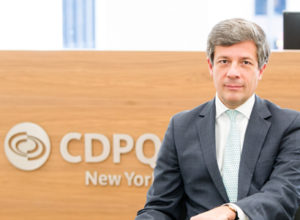 “A few weeks ago, I informed the senior management of La Caisse that, having fulfilled the mandate I was given when I first arrived, I was now hoping to take on new challenges to be able, among other things, to spend more time with my family in New York,” Beroutsos said.

CDPQ added that Beroutsos would be staying on for a few more months to ensure an orderly transition and will continue to represent the pension fund on certain boards of directors. However, CDPQ did not provide a specific time frame for finding a successor to Beroutsos.

Asked whether someone else within the organisation would temporarily assume Beroutsos’ responsibilities until a replacement is found, a spokesperson said the pension fund had no further comments to make at this time.

Beroutsos joined CDPQ in May 2014 to oversee all private equity and infrastructure investments conducted outside Québec. Previously, Beroutsos was a managing director at One Point Capital and managing partner at Navigos Capital, two New York-based private equity firms he founded. In addition to those roles, Beroutsos also spent 20 years at McKinsey & Company, where he established and managed the global private equity practice and served as a director and senior partner.

“In a very short time, [Andreas] fully rose to the challenge that I had put to him: build a highly-talented team and distinctively reposition our international private equity strategy, while generating solid returns,” said Michael Sabia, CDPQ’s president and chief executive.

Speaking to sister publication Private Equity International in September last year, 15 months into a five-year plan to expand the pension’s pool of liquid assets from $30 billion to $50 billion through direct investments and funds, Beroutsos said he planned to expand the team from 50 to 100 people over the next four years.

The pension fund, which as of 31 December had C$248 billion ($193.4 billion; €171.4 billion) in net assets, has been expanding into new markets. Last month alone, the institution opened a new office in Delhi, as reported by PEI, and appointed the first managing director of CDPQ Mexico, its subsidiary in the Latin American country.