The sceptics may believe the fund of funds model has gone out of fashion with institutional investors, but AlpInvest Partners believes it delivers something many LPs still want: expertise and access.

The Amsterdam-headquartered firm’s evolution has been swift: in the six years since it was acquired by The Carlyle Group its number of LPs has rocketed to 173 from just two; it has a 12-strong sales and investor relations team in addition to 36 at Carlyle and it has added 30 professionals to its team.

Add to that the $6.5 billion it collected for its secondaries programme in April – a 27 percent jump from its previous haul – and it’s clear AlpInvest is doing something to attract investors to its model.

And yet, it hasn’t been an easy path, according to Wouter Moerel, the firm’s head of secondaries.

“One of the biggest challenges was getting the AlpInvest brand known in the LP market,” Moerel tells Secondaries Investor. “People just didn’t know us. We spent the first three to four years knocking on doors and explaining who AlpInvest is.”

The AlpInvest of 2017 looks very different to that of 2011, and not just because its investor base has evolved. The firm has also been busy putting the finishing touches on its internal personnel structure and is embarking upon new strategies.

AlpInvest now comprises four business lines. In addition to secondaries, its primary team is led by Ruulke Bagijn, who rejoined the firm in August after stints at AXA Investment Managers and Dutch pension manager PGGM, one of AlpInvest’s two long-standing clients along with APG. Co-investments are led by Rob de Jong, a 16-year veteran of the firm.

The final piece of the puzzle is its partnership fund, the business that takes stakes in private equity GP management companies.

The strategy is being led by Sean Gallary, who co-founded Tunbridge Partners, an investment firm which acquires stakes in real assets-focused alternative managers and joined AlpInvest in February. It is understood the firm is seeking around $1.5 billion for this strategy.

This “generational change” has resulted in some personnel leaving the firm due to diverging views on what they wanted to do in the future, leading to reports about churn at the firm, according to Moerel. Such changes were intentional, he insists.

“Every step has been planned, but it took us six years to get there.”

AlpInvest’s place in the market is perhaps not so unusual for a fund of funds wanting to adapt to a world where institutional investors still want access to top quality GPs but want to reduce the amount of fees they pay. As with firms such as Ardian and Hamilton Lane, AlpInvest is aggressively pursuing separately managed accounts. Mandates comprise almost all of its $25.5 billion in primary AUM and accounted for just under half of the capital in its latest secondaries fund. Out of its 173 clients, 23 invest through SMAs, something Moerel says will only grow.

Primaries remain an important part of this, accounting for between 60 percent to 70 percent on average of a typical SMA, with secondaries and co-investments making up the remainder. AlpInvest raised $652 million for primaries last year, and its aim is to raise and deploy as much as $1.5 billion per year.

The firm is also eyeing different sources of capital, such as the retail and high-net-worth individual market, something Bagijn and the primary team will spearhead. While the firm is still at the drawing board, thinking about the exact form a product in this market will take, it will likely be a fund of funds product that mainly comprises primary investments with a “good proportion” of secondaries and co-investments over time, Moerel says.

“We’re trying to figure out right now what is possible there and what structure is economical and viable,” he says.

As for the secondaries market, which is experiencing record fundraising levels and is predicted to deliver more than $42 billion in deal volume this year, Moerel is upbeat.

“Just as Robin Williams in Good Morning, Vietnam says, it’s hot. Damn hot!” he jokes. NAVs of portfolios have risen significantly thanks to buoyant public markets and pricing is at an all-time high – average high bids for buyout stakes hit 98 percent of NAV in the first half of the year, according to a July report by Greenhill Cogent. So what is AlpInvest’s strategy amid such challenging market dynamics?

“We think everything has the opportunity to stay flat or go down,” Moerel says. In the LP positions market, the firm is very selective, acquiring single interests or highly concentrated positions where competitors are less able to use leverage because banks do not want to lend against less diversified portfolios. AlpInvest is also focusing on Asia where valuations are more attractive, according to Moerel, or the energy sector where the firm believes it is “the only game in town” due to its ability to leverage Carlyle’s sector knowledge. 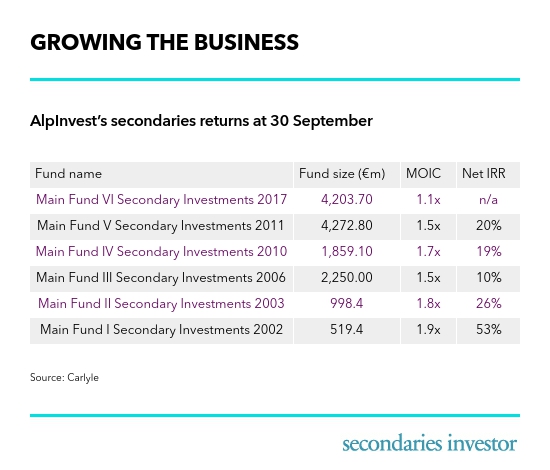 As for GP-led deals – a market that has garnered much attention this year amid brand name managers such as BC Partners, EQT, Apax Partners and Nordic Capital using secondaries for stapled deals or potential restructuring processes – AlpInvest is optimistic. Its ASP VI secondaries programme has committed to 12 investments since it began deployment in September last year, more than half of which were in GP-led deals.

One of these was the restructuring of Southern Europe-focused buyout firm Investindustrial’s 2008-vintage fund, an €865 million deal in which AlpInvest became the majority LP in a new vehicle into which six assets from the €1 billion fund were moved.

AlpInvest likes this part of the market, Moerel says. “Here we’ve been able to buy on average 8x EBITDA. We reset the carry, we get great alignment. If something goes wrong we can have a dialogue. We’ve done a lot of that.”

As the firm positions itself for the next stage in its evolution, how does it feel about its own LPs becoming more independent through in-housing private markets capabilities and potentially becoming competitors to AlpInvest themselves? Moerel is sanguine. The firm retains its clients for a long time and continues to invest on their behalf in various subsegments of the primary market where they find access difficult, such as the lower- and mid-market where there are high returns and acceptable risks, he says.

The firm can help its clients transition from a fully outsourced programme to insourcing part of their programme. AlpInvest invested solely on behalf of Dutch managers APG and PGGM between 2001 and 2011 and helped them do just that.

“We continue to have long relationships with [our clients],” he stresses. “We’re not going to hire a team for you, and you can’t hire our team. But we will help you with developing your investment business.”