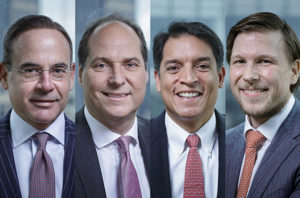 Once shunned, but now firmly established in the real estate investment mainstream, the secondaries market has built up a powerful momentum in its own right.

At the beginning of the year, Connecticut-based sector specialist Landmark Partners released figures showing transactions in the global real estate secondaries market totalled $8.2 billion in 2015, up 71 percent on the 2014 aggregate of $4.8 billion.

If a further demonstration of the sector’s impetus was needed, then November provided it in spades with the launch of two new heavyweight secondaries funds. If it reaches its $2 billion target, Landmark’s Landmark Real Estate Partners VIII could be the biggest vehicle yet raised in the sector – unless, perhaps, it is eclipsed by Partners Group Real Estate Secondary 2017. The latter does not have a publicly stated target, but Partners Group garnered $1.95 billion for its predecessor.

But can that momentum be maintained? After all, the primary real estate market faces headwinds and transaction volumes are down. Is there sufficient demand among investors for fundraisers in the secondaries space to meet their targets?

And, if they do, will there be enough deals to go around to ensure their capital is invested? Some of the biggest secondaries transactions of the past two years have been prompted by giant institutional funds seeking to reduce the number of managers they employ and the range of funds in which they invest. That process must eventually run its course.

To delve into these issues sister publication PERE assembled a group of four real estate professionals with expertise in the secondaries market at its London office for its annual roundtable.

One measure of how far the sub-sector has progressed is the number of headlines it has begun to generate. Until fairly recently, secondaries trades were commonly kept quiet. They were frequently regarded as an outcome of distress and stigmatised as an admission of underwriting failures, a perception that was reinforced as investors felt compelled to sell out of funds at a discount in the wake of the global financial crash.

That stigma has largely vanished, argues Wisdom: “Selling a fund interest is no longer viewed as a negative reflection on you or your organisation. Secondaries have come onto the fairway as far as the ability of managers to use them as a portfolio management tool is concerned. It is much more common in the industry for investors to look at their portfolios and say there are strategies that we want to liquidate because we want to change direction or change our allocation. Now, through secondaries, there is a proven path to seek liquidity as long as there is a reasonable value paid that fits their objectives. It is much more common now than it was even five years ago.”

Aberdeen Asset Management’s Lucassen still detects a trace of the former taint, however. “It has reduced. The European market has been a little slower when it comes to adopting that attitude, but we are getting there,” he says.

Early in the discussion, the participants attempt to pin down what the market means by a real estate secondary today. Traditionally, such transactions were defined by the transfer of a limited partner’s stake in a fund. Some secondaries professionals would further limit that definition by excluding interests in core funds. However, such strict terminological exactitude scarcely reflects the reality of a dynamic and rapidly developing sub-sector.

“The market has expanded beyond that,” says Wisdom. “There are deals such as recapitalisations that still constitute the same type of underwriting and analysis but take on a different structure. It is evolving over time, but the bulk of the market in terms of transaction flow is still that transfer of LP interests.”

Madison International specialises in non-traditional secondaries. Dickerman terms them “direct secondaries”. “Rather than buying an interest in a typical opportunity fund or value-add fund we are typically looking one level closer to the real estate – so investing into the ownership entity of the real estate itself,” he says.

At its broadest any transaction that does not fit into the “primary” category could be defined as a secondary trade, he argues: “A primary transaction is a real estate transaction that is being bought and sold in the traditional primary market with likely a new capital stack, a new sponsor, and a new business plan, which may involve stripping it back to the steel or turning it into something else. Everything else falls into the definition of secondary where property is not for sale but some element of the capital stack is being substituted or reshuffled or recapitalised.”

Because definitions of what constitutes a secondary vary so widely it is difficult to pin down any universally recognised measurement of the size of the market. “No one tracks the deals, so everybody makes as good a guess as they can on volume. We spoke to [CRBE’s secondaries trading platform] Property Match in Europe and their view that the market globally was maybe $10 billion to $12 billion. They say, ‘We have this much dealflow and we think we have X percent of the market, so this is our assessment’,” says Lucassen.

Landmark Partners’ figure for 2015 is $8.2 billion. Wisdom estimates it at around $11 billion. But by any definition 2015 was a huge year for real estate secondaries. Even a conservative estimate makes it the best-ever year for transactions. It also included the sector’s largest and most talked about deal of all: the $3 billion sale of secondary fund interests by the California Public Employees Retirement System to Blackstone.

“There is a dynamic shift going on in the way investors are allocating capital,” says Dickerman. “The thing I always pick up on is investors are understaffed. They have too many outside relationships with managers. They might have 30 but they want to have 10.”

As those investors rationalise their relationships with managers, the fund positions they decide to liquidate are sold into the secondary market.

But do last year’s figures represent a spike driven by CalPERS and others rationalising their portfolios? “It is already proven now to have been that in a number of ways,” says Wisdom. “If you look at the dealflow going back to 2014 it was about $4 billion. In 2015, we saw close to $11 billion when you add in those billion-dollar portfolios. This year is projected to be closer to $4 billion again. Far fewer of those large portfolios are trading.”

Dickerman founded real estate private equity firm Madison in 2002. The company, which has offices in New York, London and Frankfurt, manages real estate assets of around $5 billion. It focuses on capital partner replacements, equity monetisations and recapitalisations of commercial properties and portfolios, and also provides joint venture equity to real estate owners and investors in the US, UK and Western Europe.

Lucassen joined Aberdeen four years ago as a fund manager within its property multi-manager team. The team comprises 20 professionals operating out of offices in Singapore, Philadelphia, London and Stockholm, and manages both primary and secondary real estate investments.

Byrne has worked for Swiss Bank UBS for 20 years and was appointed to lead its real estate multi-manager platform three years ago. He was formerly chief operating officer for real estate and has been a member of the firm’s senior management team since 2007. Byrne’s team manages around $7 billion of assets, primarily for institutional investors.[/box]

Check back soon for the rest of this roundtable.