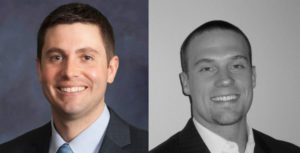 TorreyCove Capital Partners has hired Matthew Coyne as vice-president and has promoted Kyson Hawkins to the same position, according to a statement.

Hawkins’s promotion was effective from 1 August. He joined TorreyCove in 2014 and is now leading the identification, due diligence and selection of private market investments.

Coyne is joining TorreyCove’s client advisory group, and will assist with strategic planning and special projects. He will also be responsible for due diligence on some private market investments.

“They will be involved in working on all of the private market transaction types we are involved in, …. which includes secondaries,” a spokesperson for TorreyCove said in an email.

Prior to joining the firm, Hawkins worked for Sterling Partners where he evaluated direct investments of mid-market companies, particularly in healthcare, education and business services. He was also a manager at Macquarie Group, leading due diligence on co-investments, secondaries and global private equity fund commitments.

Coyne previously worked as a senior associate for Pathway Capital Management, where he conducted due diligence on private equity funds, secondaries and co-investments. He also served for Banc of America Capital as an investment analyst, overseeing the transition of a portfolio of 600 private equity funds from Fleet Bank following the merger of the two entities.

TorreyCove is a non-discretionary advisory firm creating customised investment programs for limited partners. It focuses solely on private equity and real assets with more than $31.3 billion in assets under advisement.

Earlier this summer, the New Jersey Division of Investment hired TorreyCove as consultant.