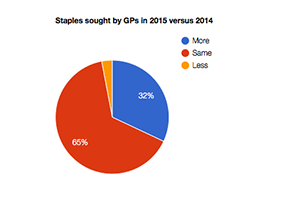 Stapled deals rose last year compared with a year earlier as more managers used the secondaries market to enhance fundraising, according to a survey by advisory firm Setter Capital.

A third of respondents to the firm’s Secondary Market FY 2015 volume report said they felt a materially higher number of general partners had sought staple deals in 2015 compared with 2014.

About 65 percent of respondents said the number of managers seeking such deals had not changed, with 3 percent responding they felt there had been less.

“Staples can be great if they work, but you’re immediately reducing your universe of investors to the ones with secondaries pockets,” a Hong Kong-based placement agent told Secondaries Investor.

In March, AlpInvest Partners led a $1.2 billion staple deal on Lee Equity Partners’  2009-vintage fund where a group of buyers purchased about $900 million worth of stakes in Lee Equity’s existing fund and committed around $300 million to its latest vehicle.