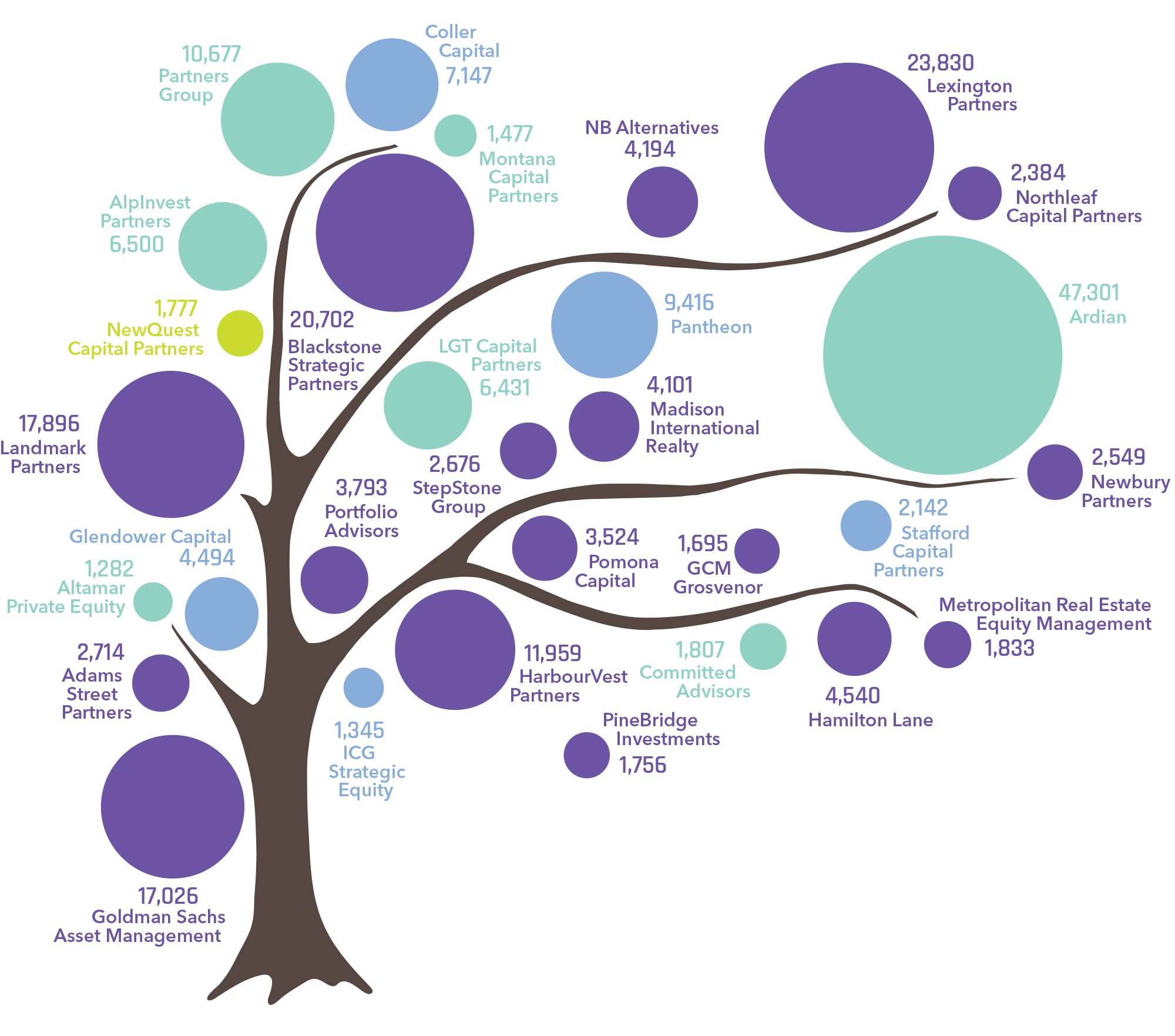 Secondaries firms are having no problem putting capital to work, as record half-year deal volume figures suggest. They aren’t struggling to replenish their stores of dry powder either. Ardian remains top of this year’s SI 30, our proprietary ranking of secondaries firms based on five-year fundraising totals, but in a greatly strengthened position. The Paris-headquartered manager has raised $47.3 billion for secondaries in the five years to 30 June, a 67 percent increase on last year’s ranking.

Lexington Partners remains in second place, also with its firepower greatly enhanced. The New York-headquartered firm has collected $23.8 billion over the five-year period, a $7.1 billion increase on last year’s ranking.

Strategic Partners, Landmark Partners and Goldman Sachs Asset Management, which make up the next three spots, have seen their firepower increase by $7 billion, $5.5 billion and $1.9 billion respectively compared with last year’s ranking.

The growth in secondaries fundraising is a direct result of events in the primary market. Primary investors have for years bemoaned the lack of high-quality acquisition targets and that those that do exist are priced to the skies. In response, private equity firms are increasingly looking at ways to hold on to businesses they like rather than sell them after three to five years.

One way they are doing this is through single-asset restructurings, which general partners such as Bridgepoint, Warburg Pincus and Bluegem Capital Partners have embarked on in the past year. Others are dabbling with evergreen fund structures, such as CVC Capital Partners, which in July raised €4.6 billion for its second long-term Strategic Opportunities Fund.

The more GPs that try to hold on to assets rather than exit them, the greater the potential for misalignment with their LPs, who might prefer liquidity now over returns later. This opens up a gap that secondaries funds are more than happy to fill. And while these dynamics exist, there is nothing to suggest a reversal any time soon.

A long way up

Being so much bigger than the opposition has its advantages but it’s not without peril. Ardian’s dominance at the top of this year’s list is largely down to the $19 billion raised for its latest flagship fund ASF VIII, which, when closed, will rank among the largest private equity funds ever raised. The Paris-headquartered manager’s secondaries funds have shot up in size since it spun out of French insurer AXA Group in 2013. It raised $14 billion for the 2015-vintage ASF VII, double that for Fund V, the last raised under the auspices of its former parent.

Being that much larger than the competition brings certain advantages. Ardian has the capital to buy portfolios of any size and can always outbid the opposition, a hand further strengthened by its liberal use of leverage.

“We got blown out of the water,” says a firm that tried to compete with Ardian on a 2017, $2.5 billion stapled secondaries deal involving Abu Dhabi sovereign wealth fund Mubadala Capital.

Having so many types of fund – Ardian has early, energy and infrastructure secondaries funds – means it can act as a one-stop-shop for LPs that want to offload large, varied portfolios with minimal fuss. Huge portfolios, such as the roughly $5 billion-worth of stakes offloaded by Japan’s Norinchukin Bank in the second quarter, require more work to diligence. But Ardian has as much, if not more, fund data at its disposal than the other large secondaries firms, easing the burden somewhat, a competitor buyer tells us.

Scale also has a downside. With large amounts of dry powder to spend, big deals are needed to move the needle on returns; deals with great upside potential may have to fall by the wayside for being not quite big enough. The larger a firm gets, the less nimble it inevitably becomes. If, for whatever reason, secondaries deal volumes dried up, what would Ardian do with all that capital, particularly as, unlike some of its peers, it has traditionally shied away from GP-led deals? These questions are unlikely to concern the firm for now as it bulldozes towards an expected fourth-quarter final close.

One group conspicuous by their absence in the SI 30 are dedicated preferred equity providers. Because they don’t strictly offer replacement capital, PEI decided against their inclusion. Still, these groups have been among the biggest fundraising success stories of recent years.

Toronto-based Whitehorse Liquidity Partners came to market in November with its third fund, seeking $1.5 billion, two months after it raised $1.29 billion for its predecessor. Led by former Canada Pension Plan Investment Board secondaries head Yann Robard and backed by investors such as Alaska Permanent Fund, Whitehorse has only been around since late 2015.

London-based 17Capital, which pioneered the strategy in 2008, is in market seeking €1.8 billion for its fifth fund. It’s growing aggressively, having made six senior hires in 2019 from firms such as JPMorgan, Nomura and CVC Credit Partners. Preferred equity allows LPs to generate liquidity from their portfolio without selling it. For example, if a pension fund wanted to generate liquidity, it could move part of its portfolio into a special purpose vehicle in which the preferred equity provider is a senior LP. The preferred investor gives cash to the LP via the SPV and gets preferential cashflows from the assets held within it.

In this bull market, the liquidity provided by preferred equity firms is mainly being used to make additional investments. In a downturn, its use is likely to become more defensive in nature.

During the last financial crisis, many LPs were forced to sell portfolios at huge discounts as they tried frantically to push unfunded obligations off their books. Next time around sellers in need of liquidity have a new avenue to explore that doesn’t require a fire sale.

Secondaries fundraising has long been lumpy, its volume dependent on the biggest names in the market. This situation is magnified when you move away from private equity into other strategies. Metropolitan Real Estate Equity Management’s $1.2 billion Fund II was the only dedicated real assets secondaries fund to close during the first half. In 2018, real assets secondaries funds raised $5.88 billion, more than three times the amount raised the year before, though this was largely down to two funds hitting final close: the $3.3 billion Landmark Real Estate Partners VIII and the $1.75 billion Strategic Partners Real Assets II.

Carlyle subsidiary Metropolitan is one of three real assets specialists to make it into the SI 30. It is joined by Stafford Capital Partners, which makes secondaries investments through its infrastructure and timberland funds of funds, and Madison International Realty, which provides equity capital directly to real estate owners and investors that need liquidity. Of the top 10, six have raised dedicated real asset secondaries funds.

The lumpiness of fundraising reflects the available market opportunity. Real estate secondaries volumes dropped 12 percent to $5.3 billion in 2018 from $6 billion the year before, largely due to the lack of $1 billion-plus portfolio sales brought to market that year, according to Landmark Partners. The longer-term, lower-risk nature of asset classes like real estate and infrastructure make price less important, so sellers are less likely to opportunistically bring portfolios to market.

The growth of GP-led deals could help drive fundraising. Credit funds accounted for 20 percent of GP-led deals by volume in the first half, according to Greenhill, having been so insignificant as to come under the ‘Other’ label in the previous report.

A possible downturn in 2019-20 could cause credit GPs and LPs to assess their options, says Jeff Hammer, until recently Houlihan Lokey’s co-head of illiquid financial assets.

On the infrastructure side, similar dynamics to what we have seen in private equity are taking hold, where a limited supply of good assets is causing GPs to hold on to what they have got.

“That creates a misalignment between LPs. It’s a really interesting dynamic that we believe will create a sizeable market opportunity for GP-led secondary transactions,” says Gerald Cooper, a partner with Campbell Lutyens.

Article updated to reflect that Whitehorse is targeting $1.5 billion for Fund III

The SI 30 ranking is based on the amount of dedicated secondaries capital raised by firms between 1 January 2014 and 30 June 2019.

What does not count?

Secondaries: For purposes of the SI 30, the definition of secondaries capital is capital raised for a dedicated programme of investing directly into the secondaries market. This includes equity capital for diversified private equity, real estate, buyout, growth equity, venture capital and turnaround or control-oriented distressed secondaries investment opportunities.

Capital raised: This means capital definitively committed to a secondaries investment programme. In the case of a fundraising, it means the fund has had a final or official interim close after 1 January 2014. You may count the full amount of a fund if it has a close after this date. And you may count the full amount of an interim close (a real one, not a ‘soft-circle’) that has occurred recently, even if no official announcement has been made. We also count capital raised through co-investment vehicles.