Secondaries funds should be used cautiously and for tactical purposes only when constructing a private markets portfolio, a report by Wellershoff & Partners has found.

In a comparison between funds of funds and secondaries funds, the former outperformed the latter in respect of cash-on-cash returns in all but the four most recent vintage years, according to research by the Zurich-headquartered economic consultancy.

“Secondaries is an instrument that is mostly for tactical purposes – you get some early liquidity, but you leave some performance on the table,” Wellershoff partner Cyril Demaria told Secondaries Investor.

The research found that the under-performance of younger funds of funds is mainly because it takes longer for their underlying investments to return cash, Demaria said. After factoring in the longer path to realisation, funds of funds outperformed secondaries funds across nine of 12 vintages.

To account for the longer path to realisation, Wellershoff compared the two strategies with a five-year lag in vintage – the approximate period before private equity funds start trading on the secondaries market. For example, funds of funds of 2000 vintage were paired with 2005-vintage secondaries funds.

The researchers applied the discount at which secondaries funds buy stakes – the average discount to net asset value for that year – and divided the distributions-to-paid-in ratio by the spread, or the difference in DPI between the top and bottom five percent of funds. This resulted in a simplified Sharpe ratio indicating that funds of funds perform better than secondaries funds and that their selection risk is lower. 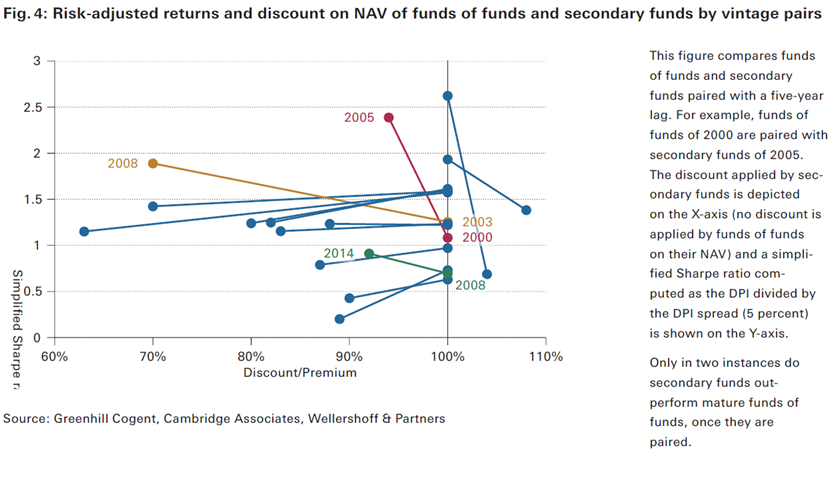 “I don’t want to sound too categorical in saying that funds of funds outperform secondaries funds,” he said. “If you have time they do, but some of our clients don’t necessarily. Secondaries is still relevant; you just have to know when to use it.”

The double layer of fees does not appear to impede the outperformance of funds of funds. This may be due to the availability of co-investment opportunities which boost returns at the same time as lowering the average cost for LPs, Demaria said.